Face to Face with Grayling

Feb 2nd 2018 : Morley Town Hall - having spent 18 months attempting to meet with Chris Grayling Transport Secretary via official channels to no avail, we ambushed him by buying a £25 ticket to attend a Conservative Dinner where was speaking. We Presented this letter to him, telling him that the two junior ministers we had met and informed of the HS2 Data scandal had left office soon after. Chris Grayling now knows that the M18 Eastern Route was chosen on the basis of false information and must now act of be part of this scandal himself.
Right Honourable Chris Grayling
Secretary of State for Transport

I am formally giving you this document on behalf of the residents of Crofton & The Crofton HS2 Action Group. We have provided this information to two of your Junior Transport Ministers on two occasions in 2017 : 8thFebruary 2017 in the House of Commons with Andrew Jones MP and Jon Trickett MP and then September 12th2017 at Portcullis House with Paul Maynard MP and Jon Trickett MP. The first meeting took place within the Public Consultation Period for the Phase 2B M18 Route Decision, the second after that decision had been made. 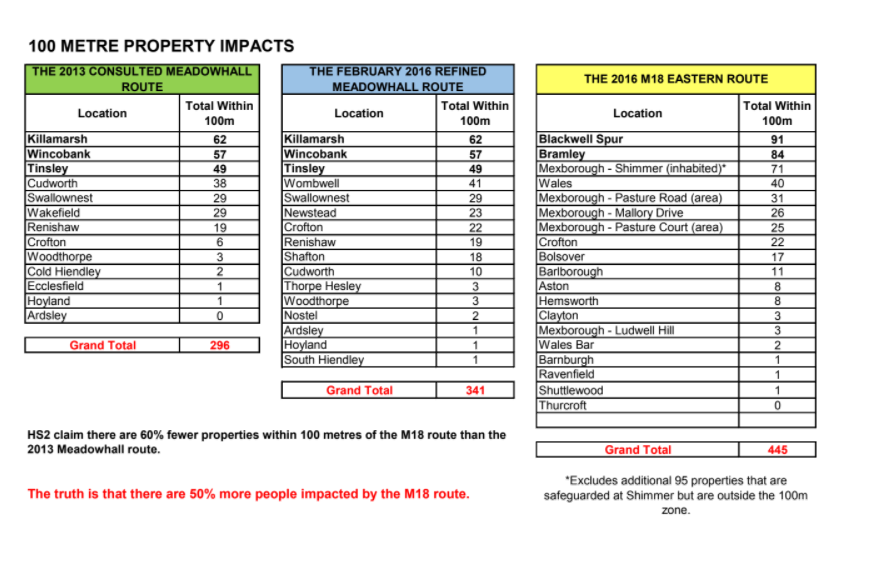 At both of those meetings we told the Ministers that HS2 Limited had misinformed the Department for Transport and yourself as Secretary of State for Transport on the number of property impacts on the M18 Eastern Route in comparison with the Meadowhall Route. HS2 Limited claimed that there were an estimated 1,000 residential properties within 100 metres of the track for the Meadowhall Route compared to a 40% lower 600 residential properties on the M18 Eastern Route.

The Number of Residential properties measured to within 100 metres on these two routes are 296 properties and 341.

Therefore the claims contained in the 2016 South Yorkshire Report and the 2017 HS2 Advice to Ministers is based on false information. We presented these numbers to HS2 Limited in a 2.5 hour meeting in Leeds on October 19th 2017 with head of HS2 Phase 2B Engagement Leone Dubois.

In this meeting it was disclosed by Jared Brook – HS2 Environment Manager that the property count estimates provided to DFT and parliament was indicative only, not intended to be accurate and for the basis of decision making. The GIS postcode datasets used were from 2014 and not geographically accurate. New Build construction such as the Shimmer Estate in Mexborough due for partial demolition would not be included in these 600 property estimates. He admitted to everyone's astoundment that despite HS2 Ltd maps showing properties in Crofton being under earthwork embankments, the GIS data could not identify them as being demolitions!

Despite this admission HS2 Limited continue to argue this data is robust, and that they do not validate estimates against actual properties on maps to check accuracy.

Since the lower property/population impacts form part of the case for the M18 Eastern Route change from Meadowhall we consider that you have been misled by HS2 Limited.

We communicated these concerns to Andrew Jones MP and Paul Maynard MP shortly before both of them left office and have not received satisfactory responses on these issues. Indeed when we met Paul Maynard he was unaware of the written evidence provided to Andrew Jones MP or the existence of the Refined Meadowhall which was used to make the decision, rather than the publicly consulted route.

We must ask you to instruct HS2 Limited to release their datasets (as they have promised to do and not done) and to meet with us to hear further similar evidence of false or inaccurate estimates being used to justify the change – including cost evidence, projections on number of jobs created, journey times, connectivity and disclosure of information.

We have zero confidence in HS2 Limited to treat communities fairly or honestly – evidenced by HS2 Limited failing to disclose enhanced Redundancy Payments to the DFT, A complaint to the Parliamentary Ombudsman of misleading statements from a community. We hold an FOI disclosure from HS2 Limited that the M18 Eastern Route is nearly identical to the East of Rotherham Route which HS2 Limited rejected in 2011 due to connectivity and impact grounds, yet in advice to Ministers in 2017 HS2 Ltd claimed was entirely different.

We have Zero confidence in HS2 Limited making the correct decision – evidenced by your overruling of their recommendation to place the Rolling Stock Depot in New Crofton (we still await a final announcement on the move to a more suitable brownfield motorway site, they failed to identify in 2011, 2013 or 2016 when our campaign group identified in 2017) HS2 Limited vouching for the financial viability and fitness of Carillion to receive a £1.4bn JV Contract after a major profit warning, share slump & flight of Institutional investors.

As the Mott McDonald Report of 2017 for Rotherham and Doncaster Councils showed, the M18 Route would created fewer jobs and GVA for South Yorkshire than Meadowhall, and have £1.7bn higher operating costs. 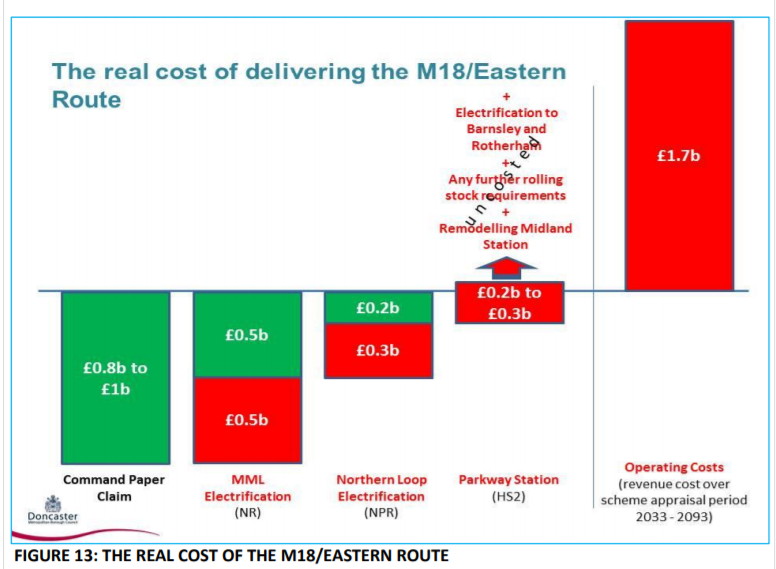 We are asking the Department for Transport in conjunction with Transport for the North to make a study of the plans of High Speed UK, who proposed a low impact, high connectivity alternative route to Meadowhall and M18 Eastern Route because this route has only 2 residential demolitions and would allow access to the Woodhead corridor to connect Sheffield and Manchester for HS3 at the same time offering a faster lower impact route to the West of Barnsley linking Sheffield to Leeds. The Northern Powerhouse Rail objective of sub 30 minutes journey time between Sheffield and Manchester cannot be achieved because the HS2 route has moved to the East, whereas HSUK plans achieve faster journey times for a saving of £5.5bn

WILL OF THE PEOPLE

We would remind the Secretary of the State that if 52% of the voters on the issue of Brexit constitute the Will of the People, 94% of the respondees to the HS2 Eastern Route Public Consultation in 2017 opposed the proposition to move the Route from Meadowhall to the M18 Eastern Route.

NO TUNNEL, NO MONEY

Analysis of your HS2 plans shows that the Eastern Leg has only 2% tunnel, reduced from 5% tunnel on the Meadowhall route, compared to 31 miles of tunnel for Phase 1. This effectively makes the Eastern Leg an unmitigated route with communities in Crofton, Mexborough, Bramley, Bolsover & Hemsworth requiring tunnel if the same rules of mitigation are followed. HS2 Limited has already ruled out a tunnel at Mexborough on cost grounds.

The 2015 Strategic Review of HS2 caps costs on the Phase 2B requiring any mitigation such as expensive tunnels to be funded by contingency or value engineering elsewhere. As Dennis Skinner MP rightly identified in the House of Commons, the North is being short-changed on mitigation, we seriously doubt whether the petitioning process in the hybrid bill is fit, as HS2 Ltd can veto tunnel proposals on cost grounds, even if called for by parliament, the Secretary of State or Environmental Impact Assessment.

It is clear, that the NAO Cost reduction programme and HS2 Value Engineering programme has already stripped out tunnel cost and mitigation along the route, leaving communities like Crofton and Mexborough to live with division and noise.

We invite you to come to Crofton, to see the harm continuing blight has caused, speak to residents who have terminal illness yet are refused a house purchase by HS2 Limited, view the evidence amassed on what is a criminal fraud against our community, parliament and the taxpayer and hear the will of the people that Crofton is not a safe place to put this railway.

Our Question to you is, now you know you have been misled by HS2 Limited to add to previous occasions such as the unauthorised redundancy payments will you be content to allow a flawed decision not to be reviewed ?